Inside the Labyrinth, ep 18: 18th Century Baking with Ed Tutino


Happy Holidays! This episode was filmed back in October at Fort Ligonier Days in Ligonier, PA. I was in the Compagnie LeBoeuf encampment (and not far at all from the lovely people of Compagnie Dumas) and therefore had the opportunity to talk with master baker, Ed Tutino.
Ed has been in the game for quite some time and is a popular staple at several French and Indian and Rev War events. In this episode, he discusses baking methods in the 18th century and gets into what military soldiers would have been eating.
Thank you Ed for doing this, even though we were all pretty cold and tired by this point! :)
**********
Thank you for reading! Go on a five day journey through time with me and receive a song or mystical story each day!
Begin your journey here:
http://eepurl.com/bdbasn
WEBSITE: http://tiffanyapan.com
FACEBOOK: http://www.facebook.com/tiffanyapanmusic
ANTIQUITY & ILLUSION SHOP: https://antiquityillusion.bigcartelcom/
BANDCAMP: http://tiffanyapan.bandcamp.com
OTHER MUSICAL PROJECTS:
WAYWARD COMPANIONS: http://wayward-companions.com
PITTSBURGH HISTORICAL MUSIC SOCIETY: http://pittsburghhistoricalmusicsociety.org
Posted by tiffanyapan at 10:51 PM No comments:

Inside the Labyrinth, Ep 17: History Myths (can we not?)

Happy Holidays! In this episode we discuss one of my greatest pet peeves: the relentless spreading of historical myths. Just a little disclaimer first, though. While I would never fault someone for not knowing something or perhaps being misinformed, it does blow my mind when said person IS presented with the facts, they are very resistant to being open to them. A lot of the time they become even more indignant and refuse to even entertain evidence. Do I get things wrong? Sure. But when I do and it is pointed out to me, I'm willing to learn and correct my mistake.
With that said, in this episode I discuss the spreading of historical myths, along with two that I am very often asked about.
Also check out the following blogs and articles:
http://tiffanyapanbeautyblog.blogspot.com
My interview with Kara Gordon on 18th century clothing:
https://tiffanyslabyrinth.blogspot.com/2018/11/interview-with-18th-century-costumer.html
Two Nerdy History Girls on 18th Century Hair Care:
http://twonerdyhistorygirls.blogspot.com/2015/08/from-archives-truth-about-big-hair-of_20.html
Silk and Sass 1776 on Women's Stays/Corsets:
https://silkandsass1776.wordpress.com/2017/11/22/busting-the-myths-on-stays/

Inside the Labyrinth, Ep 16: Women in the 18th Century & Through History

Back in September, Laura Mason Lockard and I gave a presentation on women in the 18th century and some other parts of history at the Neville House in Bridgeville, PA. What inspired this was that during my time in the living history and reenactment community, I've seen a lot of hesitation among women getting involved. Meaning that they want to get involved somehow, but are unsure of where they might fit in, because (in their words), 'what options did women have back then?' I have also seen this while even talking to visitors at a museum. Whether I've been in the schoolhouse or blacksmith shop (especially in a place like the blacksmith shop), I get the question of 'now would women have even been doing this?' (by the way, the answer to the question regarding both occupations is yes).
Episode 16 of Inside the Labyrinth consists of Laura's and my presentation for those that were unable to attend. Learn about some very fascinating women, their lives, occupations and if they really were as maligned as many tend to think.
**********
Thank you for watching! Go on a five day journey through time with me and receive a song or mystical story each day!
Begin your journey here:
http://eepurl.com/bdbasn
WEBSITE: http://tiffanyapan.com
FACEBOOK: http://www.facebook.com/tiffanyapanmusic
ANTIQUITY & ILLUSION SHOP: https://antiquityillusion.bigcartelcom/
BANDCAMP: http://tiffanyapan.bandcamp.com
OTHER MUSICAL PROJECTS:
WAYWARD COMPANIONS: http://wayward-companions.com
PITTSBURGH HISTORICAL MUSIC SOCIETY: http://pittsburghhistoricalmusicsociety.org
Posted by tiffanyapan at 10:42 PM No comments:

So back in November, I was a guest at the Dark Xmas Horror Movie and Pop Culture Convention in Hudson, OH, representing films like the forthcoming Midnight Massacre and the already released The Downfall of Mr. Difford. I always look forward to these things and they are always a fun time.
I arrived at the hotel on Saturday morning and as I was heading to my table in the convention area, the sounds of the music of JLo (my queen...or at least one of them) was playing through the speakers. Jennifer Lopez was then followed by 80s metal. Because of that, I knew this was going to be a kick ass event. You just can't beat a JLo and 80s metal mix. 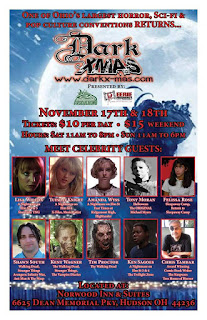 I filmed the event for episode 15 of Inside the Labyrinth, interviewing some of the great people there.

And of course got some cool photos for the blog! 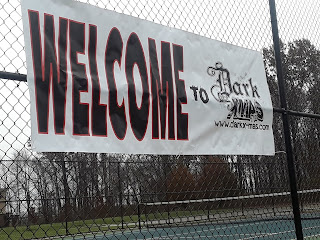 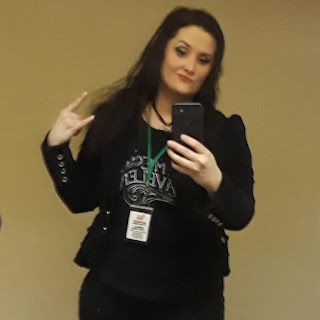 Ready to rock in my Time Traveler shirt, thanks to Jess at Pennyriver Costumes (who I had the pleasure of meeting at Bushy Run Battlefield) 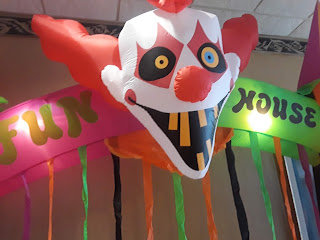 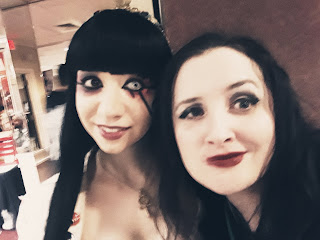 with the lovely Janet Decay, who was interviewed for Inside the Labyrinth 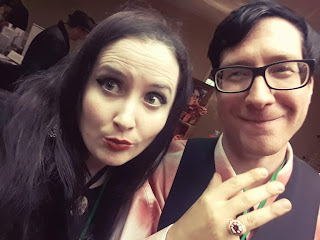 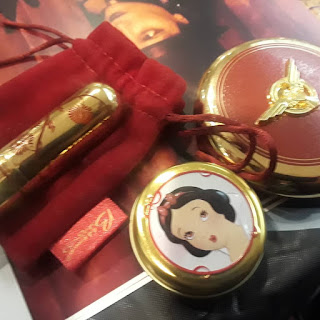 Besame Cosmetics kept me looking fresh during the event! 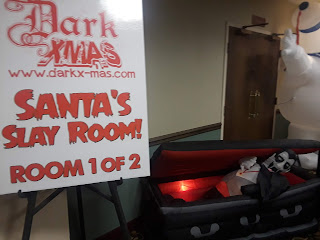 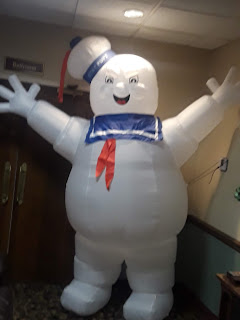 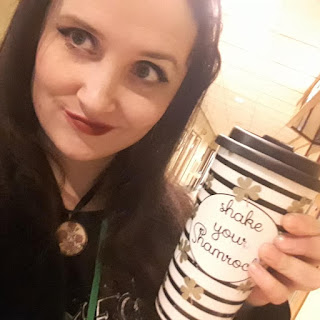 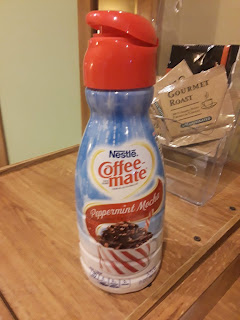 Yes, this creamer was in the lobby! 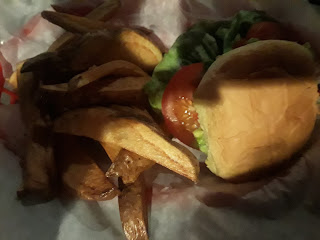 my not so healthy but somewhat paleo friendly dinner 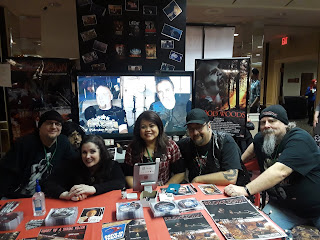 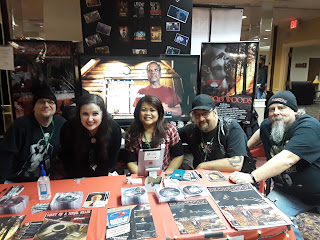 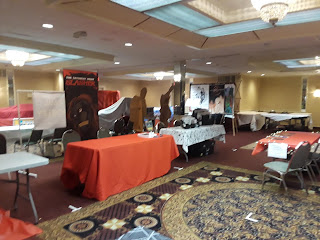 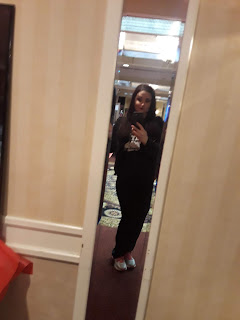 after I changed into comfy sweatpants 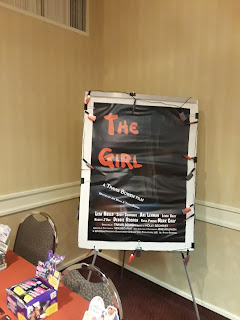 movie poster for The Girl 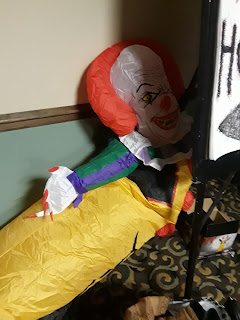 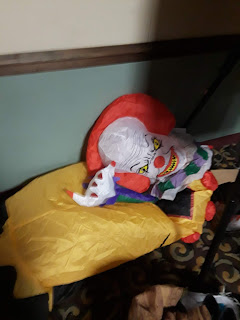 Yes, even Pennywise had had enough at the end of the event and after party! I got this cool Dark Xmas shirt, which I wore with my sweatpants after the event. Thanks Travis!