Showing posts from August, 2015
Show all

Bygone Eras: "But They Didn't Know That Back Then!"

August 24, 2015
Yes, 'tis a statement I hear quite often. And in some cases it is true while in others it is not. But when it's wrong, boy is it ever! Recently, I read the book Death by Petticoat: American History Myths Debunked by Mary Miley Theobauld of Colonial Williamsburg . The book is a fast, easy read and great for those just being introduced to historical studies, especially when it comes to really getting to know where such widespread myths came from. Myths like "People didn't bathe back then" ( see this great article/rebuttal of that myth from the blog Frock Flicks ) or "Women in colonial times were sent to the pillories for the crime of showing their ankles" or the old "Prudish Victorians 'dressed' their naked furniture legs in the name of modesty" or "men and women in the Victorian era had to used separate staircases in order to avoid indecent exposure of the ankles." Seriously, what is it with our obsession with showing ankle
Post a Comment
Read more

Check out an awesome band I connected with at my last show. Especially if you like bagpipes and a nice hurdy gurdy. :) You can also visit their website at http://ashagal.com ***** For first access to giveaways and other content not seen by the rest of the world, sign up for the free Messages from the Labyrinth Newsletter! Paperback copies of Descent (The Birthrite Series, #1) and Sacred Atonement:Novelette (The Birthrite Series, # 1.5) available together for the low price of $21.00 at my Official Website My music projects are available at CDBaby My filmwork is on IMDb "The Birthrite Series" and other books at Smashwords and Barnes & Noble NOOK  My books and music are also on Amazon and iTunes Tiffany on Goodreads Support great authors and independent bookstores at Smashwords and Indiebound
Post a Comment
Read more

August 20, 2015
Hi everyone, A quick update and plans for the near future: - In getting up my new store on my website, one of the new merch items I'm having made are bookmarks. My goal is to have 4 different kinds with design and quotes from The Birthrite Series . The ones I will be having printed will be eco-friendly with vegetable based ink and printed on paper that is 55% post consumer recycled content. And they will be beautiful! -Temporarily, my debut album Poet is out of print (but won't be for long) as I plan to repackage the album in a digipack instead of a jewel case. However, the album can still be purchased digitally. -And I plan to release the next two installments of The Birthrite Series and get the new album Antiquity going before the year is out. Lots to do, but it will be worth it. Also: -Check out SHOWS AND EVENTS to see where I will be next! - The beginnings of the new store is open! Check it out at my official store. . ***** For firs
Post a Comment
Read more

An Update and Reflections (Free-styling it today)

August 17, 2015
Hi everyone, This passed weekend performing at the Mythmusica Music and Faerie Festival was a really great time (YouTube videos coming soon). It is always fun reconnecting with old friends and performing with musical acts we've always enjoyed sharing the stage with, along with making new friends and connections. It was also our first time performing out in a really long time (I took about two years off from writing and recording music to get my book series going) and overall - other than a couple small glitches, which happens at these things - it went off pretty well. In addition to this, it was also a turning point of sorts. As many who know me well or even those who are simply familiar with my work and/or read this blog on a regular basis know of my interest in history. It is an interest I have always had. However, in starting to do research for The Birthrite, I started on a journey that really took me to places I almost didn't expect to venture to. This journey ended up
Post a Comment
Read more

August 14, 2015
...to our regular programming after this weekend's Mythmusica Music & Faerie Festival . :) ***** For first access to giveaways and other content not seen by the rest of the world, sign up for the free Messages from the Labyrinth Newsletter! Paperback copies of Descent (The Birthrite Series, #1) and Sacred Atonement:Novelette (The Birthrite Series, # 1.5) available together for the low price of $21.00 at my Official Website My music projects are available at CDBaby My filmwork is on IMDb "The Birthrite Series" and other books at Smashwords and Barnes & Noble NOOK  My books and music are also on Amazon and iTunes Tiffany on Goodreads Support great authors and independent bookstores at Smashwords and Indiebound
Post a Comment
Read more

What's Going On Over Here 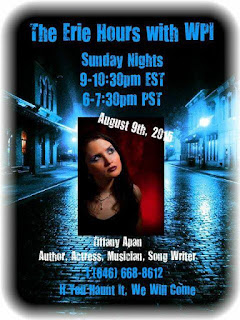 Hi everyone, This is one of those posts where I fill everyone in on what's happening in my corner. :) - First, I am happy to announce that I will be appearing this Sunday night on the podcast, The Erie Hours with WPI . The show starts at 9pm EST. So tune in. It will be an awesome time. :) - There is also still time to win a copy of Descent and Sacred Atonement: A Novelette at the Unusual Historicals giveaway. Just comment (with your email address) in the comment section at the end of either the excerpt or Q&A and you are entered! Unusual Historicals DESCENT Excerpt Unusual Historicals Author Q&A - In film news, I am told that the film I act in titled The Downfall of Mr. Difford is now in the final editing stages. Check out the trailer: -I will also be filming my final scenes for the film, Midnight Massacre. So stay tuned for news on that front. :) - Also, two songs from my album POET are being featured in the short film Knock. I was also informed t
Post a Comment
Read more

August 02, 2015
Hi everyone, First I will mention that the Q&A part of the feature and giveaway of Descent ( The Birthrite Series​, #1) at Unusual Historicals is now up. :) http://unusualhistoricals.blogspot.com/2015/08/author-inerview-book-giveaway-tiffany.html So with that said, onto the book review of The Vanishing American by Zane Grey. Zane Grey was born on January 31, 1872 in Zanesville, OH. He was a semiprofessional baseball player during his youth, along with being a "half-hearted dentist". He studied dentistry to appease his father while on a baseball scholarship at the University of Pennsylvania. His true passion, however, was writing and he put himself on a strict regimen when it came to honing the skill of crafting a gripping and compelling story. It would pay off as he would soon go on to become among the bestselling Western authors of all time. For much of his adult life, he had at least one novel in the top ten each year. According to the Official Zane Grey's
Post a Comment
Read more

August 01, 2015
Hi everyone, I will be posting my review of The Vanishing American tomorrow evening, along with other news that is happening in my corner. In the meantime, enjoy a full chapter preview from Kindred (The Birthrite Series, #2). Also, the awesome blog Unusual Historicals is featuring Descent (The Birthrite Series, #1) as well as a giveaway for a chance to win a free copy of that book along with the novelette, Sacred Atonement (The Birthrite Series, #1.5). So check out the feature of Descent on Unusual Historicals, followed by a Q&A that will be featured tomorrow. :) Now without further ado, here is a chapter from Kindred . As I stated before, Dorothy's cousin Cletus is introduced in Descent but only gets a cameo appearance. In Kindred, he takes center stage a little more. :) CHAPTER 2 Pennsylvania Railroad Station in Wilkes-Barre, Pennsylvania 1 Cletus awoke at around five 'o' clock in the evening as the train was pulling in to the st
Post a Comment
Read more
More posts