Showing posts from February, 2021
Show all

ONCE UPON A MOONLIT PATH: Part 1, Chapter 3 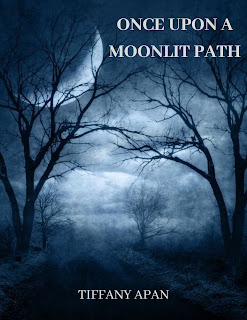 Catch up with the story by reading Chapter 1 and Chapter 2 if you missed them!  CHAPTER 3 Marissa turned her car into the parking lot of the museum, slowing down in front of the marquis. She turned the engine off, taking the key out of the ignition. She sat for a moment, taking in the surroundings and the grounds of the Wentworth House. Her encounter with Christopher had taken place a week ago though it felt like only yesterday. She had gone to the museum to work on a few things and each time she would look at the mirror above the mantle in the dining room, she thought she could feel Christopher staring back at her. The idea brought a soft smile to her face before a slight pang of sorrow would permeate her as she recalled him speaking of how his family was trying to betroth him to some other woman. Marissa emerged from her car, starting down the walkway and thinking about how far away the next full moon seemed. But when that time came, she would drive over to the Moonlit Path and w
Post a Comment
Read more

FFL FRIDAY: Have you found the Faerie Ring? 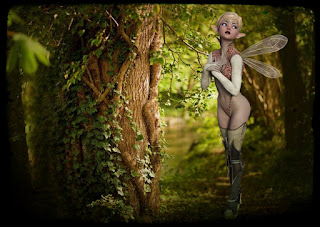 Artwork by Andrea Dean Von Scoyac   Have you found the faerie ring? A fairy ring, also known as fairy circle, elf circle, elf ring or pixie ring, is a naturally occurring ring or arc of mushrooms, often found in forested areas, but can also appear in grasslands or rangelands. They are imprinted in many lore and legend, particularly the lore of Western Europe and is most associated with English and Celtic tales. According to some of the lore, if a human should happen upon a fairy ring and enter (intentionally or not), he or she will be forced to dance with the creatures. The human visitor will be unable to stop until he or she goes mad or perishes from exhaustion . Enchanted as they seem, faerie rings hold many dangers. According to an article written by Marla Brooks (and the article is linked below), fairy rings are also worn areas in the grass where the fairies had been dancing. Brooks writes of how those who join the fairy dance withing the circle under the moonlight are lost to
Post a Comment
Read more 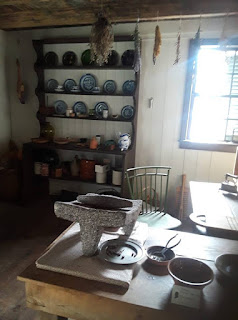 Greetings time traveller! As we continue to brave the last days of winter, many still seek out a warm hearth to gather around. And what better pairing with a fiery hearth is there than a wintry beverage? In my years of living history, I've seen people surprised over the fact that our predecessors from hundreds (thousands) of years ago enjoyed chocolate in a variety of forms. So if you are among those, here is a brief history on chocolate (I gave a presentation on this very subject at the museum a year or two ago). The earliest known use of chocolate (or cacao) dates back to the Olmec society of modern day Southern Mexico. Aztec and Mayan culture also consumed it, though among the Aztecs, it was consumed only by the ruling class. In Mayan culture, it was obtainable for all. Later, chocolate was introduced to Spain and then later on spread through Europe and other continents through trade. It was quite a popular beverage in early American during the 18th century, served in taverns as
Post a Comment
Read more

Once Upon a Moonlit Path, Part 1: Chapter 2

If you missed Part 1, Chapter 1, catch up on the story here   Marissa’s eyes fluttered. She stirred, feeling relief in finding her head laying upon a pillow. She exhaled, relieved that the ordeal with the man named Christopher had been a dream. Bringing up an arm made her realize that she was still in her period attire. Apparently, she had just fallen into bed upon coming home. She opened her eyes to a darkened room. As she sat up, her eyes adjusted to the dark and she could make out the furniture in the room. Furniture that was not hers. With her heart pounding, she looked around, recognizing the room as one in the upstairs part of the Wentworth House. Groaning, Marissa lay back down. She knew this room as the room in which the museum stored the 18 th century attire used by some of the staff. Only now it was furnished as a bedroom. Christopher’s bedroom is just down the hall…in your office… a voice in the back of her mind whispered. Shivering slightly, she looked a
Post a Comment
Read more
More posts