Back in August, a trip to Gettysburg was taken and of course, that is a town in which there is much to do. So much to do and so little time to do it all - in my opinion - best describes a weekend trip to Gettysburg!
A few posts ago, I talked about the Dobbin House Tavern, one of my favorite places to eat and even just walk around at. It is the oldest establishment in Gettysburg, built during the late 18th century.
While the Dobbin House is a very charming place with a very fascinating history, with Halloween in the air, I will take you to a location with a more - well - sinister vibe. Not that the Farnsworth House doesn't have its own charm. In fact, I find the overall ambience of the place quite appealing (especially to the goth kid that still resides within and manages to make her appearance every so often).
With Halloween in the air, I'm going to continue my summer time travels by covering some of my favorite locations in the very haunted town of Gettysburg.

I will say that when you first enter the Farnsworth property, there is a feeling of almost stepping through a portal. Yes, the entire town of Gettysburg is quite historic and each building seems to breathe with a life of its own, but the Farnsworth Inn definitely stands out. Perhaps that may be due to the fact that - sort of like the Jenny Lind House - its history is steeped in some gruesome horror. And much of the history is certainly not for the faint of heart (in fact, the ghost tour we took was advertised as just that).

Prior to the tour, dinner was had in the restaurant of the Farnsworth Inn. And of course I snapped a few photos along the way. 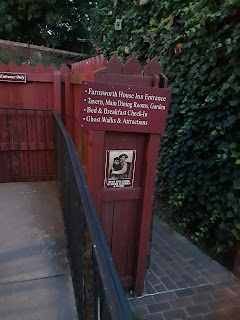 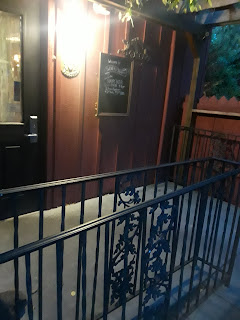 Two photos of Sweney's Tavern entrance, which I took a quick peek in before heading to the Inn. 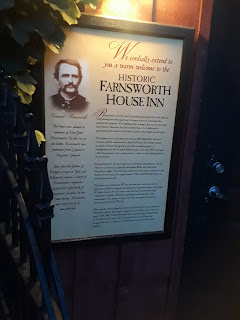 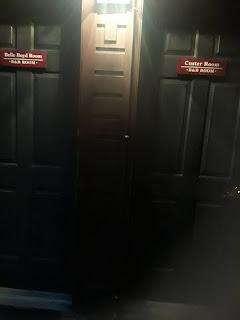 A couple of the available rooms in the Farnsworth House

I was very much taken by the dark but beautiful interior of the Farnsworth Inn. The food selection on the menu was definitely unique but it was delicious. And they let me keep my menu (score!).
There was one particular appetizer that was a sort of savory gelatin and I unfortunately can't for the life of me recall what it was, but it was one of those foods that while I didn't dislike it, it was definitely an acquired taste. And I shared this with the waiter and he agreed.

But then they brought out the Jennie Wade bread with apple butter and THAT was delicious. 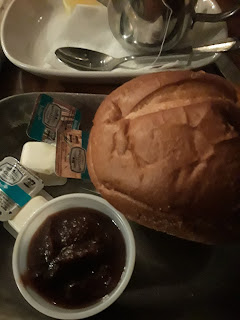 Now who is Jennie Lind, some of you might ask and what does bread have to do with her? I will be telling her tragic tale in a future vlog this month.

Anyway, I ended up getting the Company Cook's Soup of the Day (Chicken and Wild Rice), and a fruit, cracker and cheese platter was also had. Both were quite delicious!

After that, I had to get a few photos of the interior before heading over to the ghost tour. 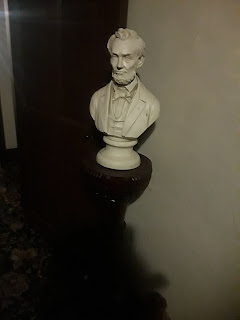 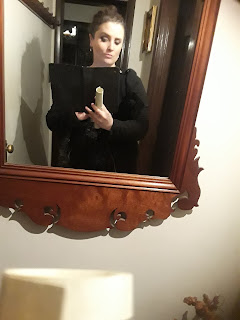 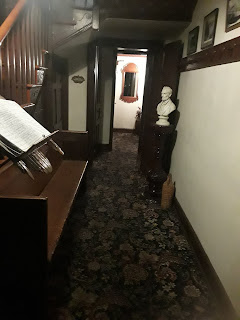 I absolutely loved this hallway shot


The ghost tour group was pretty big, but it was a lot of fun. And we had a great tour guide, Lisa Patrick and her husband also came along for the ride. He would sometimes harass her in a very good natured way, and seeing their banter was also quite enjoyable. 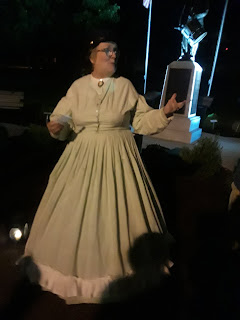 Our wonderful tour guide, Lisa, who certainly did not disappoint in the tour!

Lisa and her husband took us through the town of Gettysburg to a few areas key to Gettysburg haunted history. This included the Jennie Wade House and even a now modern school that was built over a battlefield that was quite active during the time of the Civil War. We went to a few churches that were once field houses (houses used as hospitals during the Civil War...those histories are indeed gruesome) and it was interesting hearing the stories behind them. On top of the fact that it was a very lovely night. 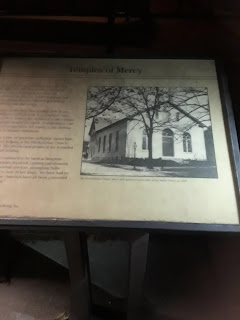 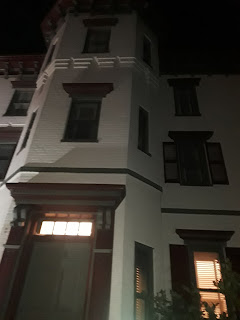 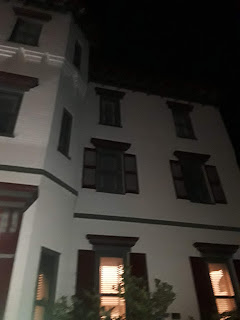 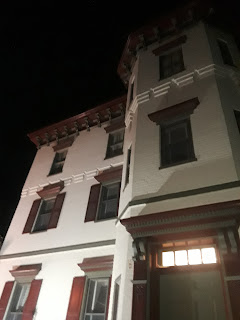 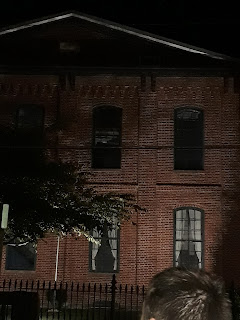 After our walk around town, it was back to the Farnsworth Inn and down into the basement to top off the tour. The entire basement is set up for a funeral service. It is said that one is more likely to experience activity sitting toward the back of the room. So guess where I insisted on going... 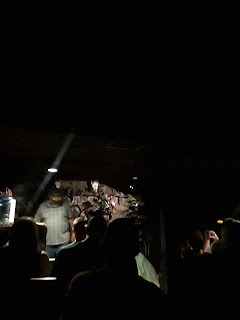 The view from the back of the basement...

While down here, Lisa and her husband told of the Farnsworth house being a field house among some of the former residents. I can't say that I experienced anything supernatural while down in the basement, but there certainly was a vibe about the place and there have been many sightings reported by guests that have stayed here over the years. 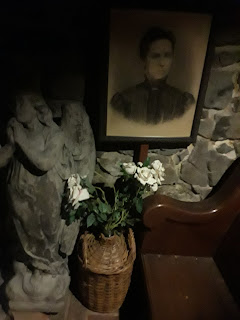 Another area of the Farnsworth Inn basement

After the basement, Lisa and her husband gave everyone two bonus stories outside of Sweney's Tavern. It was overall a very enjoyable evening and I very highly recommend the Farnsworth Inn Ghost Tours if you ever take a trip to Gettysburg (the tour I talk of in this post was the Confederate Hospital Walk). It even gave me a couple ideas for the bonfire tales night I'm organizing at the John Neville House for later this month.
Visit the Farnsworth Inn website and check out what they have to offer.

I will continue my posts on Gettysburg through the month. Until then, pleasant dreams... 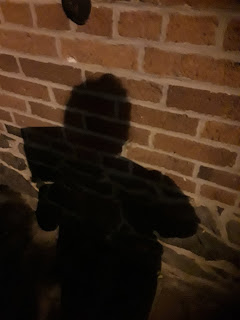 
Thank you for reading! Go on a five day journey through time with me and receive a song or mystical story each day!
Begin your journey here:
http://eepurl.com/bdbasn
WEBSITE (new website coming soon!): http://tiffanyapan.com
FACEBOOK: http://www.facebook.com/tiffanyapanmusic